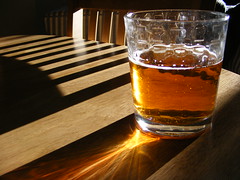 I’m one of those folks that is squarely in the camp of the glass is not just half full, it’s mostly full, so this post may seem a tad uncharacteristically, well, negative.

But here’s the deal, I’ve worked with thousands of business owners over the years and I’ve learned that the rosy point of view isn’t always the first place that people go when they think about their world.

But that’s OK, because, despite what Harold Alden and Johnny Mercer wrote and Bing crooned, you can learn a lot when you accentuate the negative. People can often tell you what they don’t want more vividly than what they do want and that can be a great place to start to get real.

I was reminded of this by a post that came across my RSS reader this week from Business Week called The Stop-Doing List.

I think it can be very useful to get the negative, what you don’t want, out so you can finally see more clearly what you obviously do want.

If this idea resonates at all, and maybe even if it doesn’t quite yet, I would like to suggest you plow through the following list and throw open the window to the negative so that you can shine a light on what’s left. Get a pad and paper and get to work on this today.

Um, that should keep you busy – clear the decks by getting this stuff down. Take an afternoon and hole up in the back corner of a public library and make these lists. The very fact that you give what you don’t want, what you aren’t willing to do, some undivided attention will free you to actually see what must be, what you must keep and hold in order to have what you do indeed want more than anything else in the world.

Many small business owner don’t pay much heed to some of the routinely accepted practices of large organizations. Things like mission statements, culture and branding seem like tools for that distant future when they get big.

Here’s my take – small businesses have the very same needs when it comes to planning and may actually benefit more from a focus on vision and culture because they can actually do more to influence it directly.

My guest for this week’s episode of the Duct Tape Marketing Podcast is John Spence. John is a consultant, speaker, trainer and author of several books including Awesomely Simple. John has developed a reputation for helping very large organizations break down and communicate their vision and values. (You can pick up some free resources from the book here)

I bumped into John at an event where I was speaking and it occurred to me that his message was one that more small businesses should hear.

In this session we talk about:

John’s book is a quick read and shines a light on some topics that small businesses can ill afford to sit out.